August 21 at 7:30 pm9:00 pm
Grace Cathedral San Francisco, CA
Celebrating the Voice of Women Artists in the Centennial of Women’s Suffrage
It is such a joy to share the amazing musical voice of Fanny Hensel, as the United States celebrates 100 years of the 19th Amendment this August, granting women an equal voice to vote.
Fanny Hensel was a German composer and pianist of tremendous musical talent and skill like her famous younger brother, Felix Mendelssohn Bartholdy. While Felix’s music reached audiences worldwide, Fanny’s music was heard in Sonntagsmusiken (Sunday musicales) which she hosted at the Hensel home in Berlin. Of her more than 450 compositions, this program highlights the first musical calendar ever composed for piano and the organ processionals she composed for her own wedding, these captivating works first published more than 150 years after their composition. You will also be treated to four of Fanny’s favorite songs for piano which she did publish just before her sudden death at the age of 42.
I hope you will be mesmerized by the organ and piano music of Fanny Hensel, a tremendous music talent not yet heard in the canon of classical music.
Program
Präludium in F Major for Organ (composed 1829; published 1988)
Vier Lieder (Four Songs), Opus 6 for Piano (published 1847)
Das Jahr (The Year) for Piano (composed 1841-1842; published 2000)
Postludium in G Major for Organ (composed 1829; published 1988)
***
1934 Aeolian-Skinner pipe organ
Steinway D piano
Grace Cathedral, San Francisco
***
Tickets available at Eventbrite URL below.
Find out more » 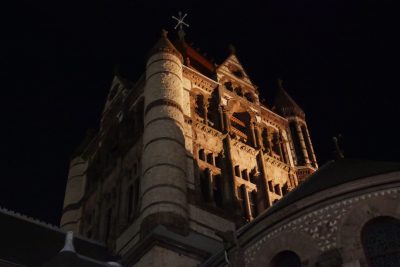